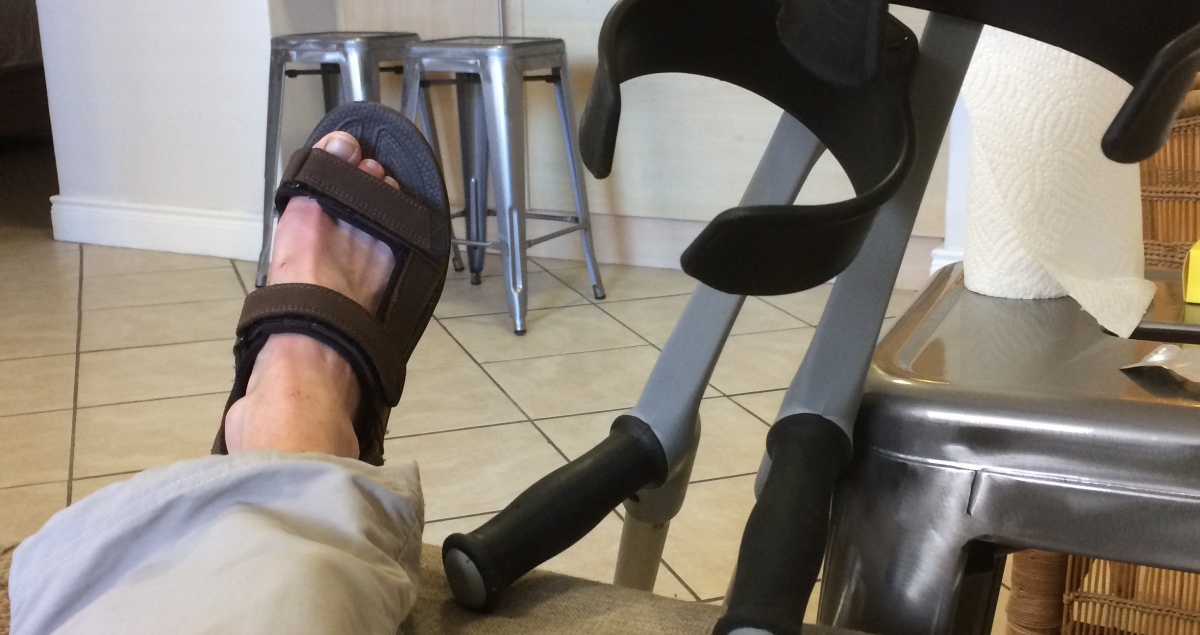 “Would you like me to to move a chair over so you can put your foot up?”

The woman, older than me, very stylishly dressed, and speaking perfect English, could see I was struggling to figure out what to do with my foot. If I put it down on the floor, I might experience more of the shooting pains that had brought me to the emergency room. I had seen the doctor and had settled into a plastic chair in the waiting area, while Joe settled the bill with the receptionist.

“You’re so kind,” I said, “I’m okay.” I had settled on sticking my leg straight out.

“I’ve had those. They’re marvelous,” she nodded at my crutches. “They’re so lightweight. The only problem is that they don’t really stand up if you lean them against something.”

“I suggest setting them down on the counter, for example. Otherwise you may have to pick them up off the floor. But they’re very good.”

Joe came out, we said goodbye, and we made our way to the parking lot, me practicing my new crutch-walk, while we waited for the Uber.

“Do you need a lift somewhere?” the same woman asked. She had come outside. We were standing in the sunshine under the gorgeous blue sky. We told her we had called an Uber.

“Are you sure?” she asked again. “They sometimes take a while.”

We assured her we were fine and thanked her again for her kindness.

We’ve just marked our first anniversary as Episcopal Volunteers in Mission. (April 1!) I’ve been thinking a lot about what I’m learning from this experience.

And at the top of my list this morning is through the kindness of strangers.

Like the woman who was in the emergency room for her own reasons, but took the time to try to help me in my awkwardness.

Like the nurse and the doctor and the x-ray technician who helped me and made a diagnosis. They were doing their jobs, but did them with gentleness and offers of reassurance that this isn’t something serious (a bone spur) but will just take time (and some anti-inflammatories) to heal.

Like a whole host of people since we arrived here who haven’t had to help us but who have.

The man who caught up with Joe and me while we were walking home from the gym to return the gym pass I had dropped, who, along with his family, have become dear friends.

The gym security guard who flagged down the man and asked if he could try to catch up with us to return my gym pass.

The people who have spoken more slowly, answered questions, given directions, made suggestions, introduced us to people, made connections for us.

Not to mention the people who are working on the water crisis where we live in Makhanda/Grahamstown, drilling for water, trying to figure out longterm solutions, and praying.

I’m sure I will spend a little time later crying about the inconvenience and loss of not being able to run for a while and needing to use my spiffy new crutches to get around until I start feeling better. But right now my tears are for the love of God shown through the kindness of strangers.